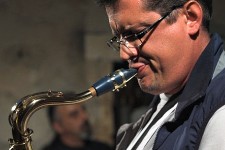 Domagoy Ralasic was born in the family fond of music. He started following piano and music theory lessons at the age of 6. At 14 he began with the clarinet study what he took up to the conservatory training, first in the classic music repertoire for this instrument. He was actually interested in tenor saxophone but there was no money at that time to buy a good one. At that time and the local music school, only the best clarinettists got to play on school saxophone in the school orchestra, as a secondary instrument. This is how he got his hands on the first tenor sax.

Later on Berklee, Domagoy met more American young musicians of that orientation, also Aron Goldberg who later became Joshua Redman's pianist. It was in the Jazz History class of the journalist/jazz critic & writer Ruud Kuyper that young Domagoy read at the end of the James Lincoln Collier book "Making of Jazz-A Comprehensive History", that the future of jazz at this moment does not only need further innovation in completely new, more free and ethno new styles drifting ever further from their roots but that also needs talented young people, well educated in music, who can learn, feel and understand all what has been made in the short time of jazz history and be able to develop their own personal voice within the tradition and from there, possibly to take it elsewhere. Another inspiring example was Pat Metheny Group with Lyle Mays.

After first few recordings, Domagoy Ralasic was described in the international jazz press as a hard swinging, full bodied personal toned, straight ahead jazz tenor saxophonist with a story. Because of the classic clarinet studies, he learned that the classic music values well-kept till today in classic music scene, could be useful pattern to preserve the jazz classic values as well and that the new forms and styles experimenting with no mastered classic values first, do not always produce a new, durable quality, after for time being overrated by marketing trend settings of the current music industry that already pays the dues of this misunderstanding. Domagoy was also inspired by the brilliant classic pianist of his generation, Ivo Pogorelich who still plays Liszt, Chopin, Tschaikowsky and Rachmaninoff, till sold out Carnegie Hall, as we speak, instead of experimenting. On the other hand, playing in the style of timeless jazz giants like Lester Young and Ben Webster with fresh, personal voice of today, should still be possible in jazz and, more important, could make the jazz future more stable and in these times more a re-discovery of the essence to the young generations and new audiences, then a repetition. Reading the Music Aesthetics by Theodor Adorno and studying the history of Jazz, Western Music and Arts, helped in finding the solid ground for developing own voice on the tradition, mastering the jazz language from the 30ies till the 60ies, first. Thinking of this kind became the solid base for music growth of young Domagoy in the turbulent time. In school days, this was often against what back then have been assumed as “modern”, dissonant school-mainstream.

When Clark Terry led the conservatory big band on the Heineken Jazz Festival 1989, he recognised young tenor player immediately and gave him many solo's what followed with salvo of the positive reactions from the local press in Rotterdam back then. Same happened year after when Joe Lovano, Joe Pass and James Moody came to school and led the school big band at the festival where Domagoy was playing. After the concert, Moody took Domagoy back stage festival to watch Sonny Rollins close from the corner where Dizzy Gillespie and Michel Petrucciani also stood watching Rollins' concert and introduced young Domagoy to Joe Lovano who was getting his recognition at that time in John Scofield band. In mid 90ies, the star trumpeter of the Quincy Jones, Clark-Boland, Lionel Hampton and Dizzy Gillespie Big Bands, BENNY BAILEY, came to town and hooked up young Domagoy, what resulted in a record debute on Timeless Records "Bag is Packed" and international exposure for young tenor saxophonist. Croatian born-Dutchman was quite often invited to perform in BP Club, Zagreb Croatia, led by Croatian famous vibe player Bosco Petrovic, with the Oscar Peterson Rhythm Section regularly there, Martin Drew, Alvin Queen-N.H.O. Pedersen, Duke Ellington bassist Jimmy Woode and his daughter vocalist Shawnn Monteiro, what led to more international exposure.

In 2000, Chicago pianist Don Bennett came to town and asked Domagoy to join his band what included recording of Bennett's new Chicago album and concerts around Chicago area, including Jesse Davis, Robert Shy, and Malachi Thompson. Here, Domagoy also played bass clarinet what was his 1st American recording and on this instrument. While working on this project, Bennett put Domagoy in Blackstone Hotel, famous Chicago history and movie-shooting place (“Untouchables”, “Pig-Babe”). 3 nights concert presentation of the record followed. It was held at "Green Mill" Art Deco jazz club at Chicago Broadway, still the same as it was in the time of Dutch Schultz, who was regular guest here with all the anecdotes and Hollywood legends hanging there and around, still. A bit later, the Brazilian influence came upon tenor sax of Domagoy, hearing the Manhattan Transfer new album “Brazil” with Stan Getz, Pat Metheny Group with Lyle Mays and meeting a group of musicians from Rio de Janeiro and Sao Paolo bringing him Bossa Nova of Gilberto, Jobim, Linz, Nascimento and, of course, Stan Getz.


From the “Benny Goodman Night”, theatrical Rotterdam concert held on 24 May 2014, with the “B.B. Swing Orchestra” of the clarinettist Bernard Berkhout, featuring guest soloist on tenor sax – Domagoy Ralasic:
https://www.youtube.com/watch?v=FGtJFrjpqvo

(I Would Do) Anything for You (Benny Goodman Night)
https://www.youtube.com/watch?v=EzOt6otkx_Q

You Turned the Tables on Me (Benny Goodman Night)
https://www.youtube.com/watch?v=wisCSY7w--o 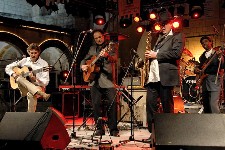 PRESS NUMBER
Update Required To play the media you will need to either update your browser to a recent version or update your Flash plugin.